Dutch duo Prefix & Density recently released their debut album on Rough Recruits, named “The Second Pathway”. It’s been a long time coming for Wouter & Bas: they’ve been releasing Hardstyle for about 8 years, but this is the first time they’ve showcased their skills in an album. They started teasing it late last year and since then they’ve released short clips with parts of a few different tracks. They portrayed their album on social media as something that took its time to be perfected, and the care they put into it was immediately noticeable on the first contact with the album.

In an interview back in November, the artists stated that this album has a very personal meaning, starting with its title. “The Second Pathway” can be interpreted as going your own way, in a journey of self-development/improvement, which can translate to Prefix & Density developing their own particular sound throughout their career.

The album is split in three parts, and it is absolutely essential we look at it this way. Each part can be, in some way, related to our lives, the challenges we face and how we overcome them.

The first part is named Awareness and it starts with a melodic intro with strong vocals that challenge the listener to think about the fear of regret and to wake up to the life that surrounds him.

The second track is called Reflection. The challenging tone from before continues with a very strong question:

If you were to die tomorrow, would you do anything different?

The track gains momentum with very heavy kicks and an uplifting lead melody that makes you want to separate yourself from the negative things that blind you. Reflection is about zooming out of all the troubles and embracing that in the end, we’re all lucky to have an opportunity to make something out of our lives. It is about seeing the positive amongst the negative.

The third track is Grey Clouds, and according to the duo it speaks about “facing disappointment but keeping moving forward to achieve your goal”. The distinctive elements here are the vocals and all the work that went into the melodic part of the track.

The fourth track is Make Up Your Mind.

Make up your mind, time is yours now

The mid intro is very interesting, as it immediately makes the track very energetic. This prepares us for the climax, which has a distinctive melody made with very familiar elements, resembling the track Time Travel, released last year. The second climax is really interesting as well, with a very prominent screech that fills the speakers and well placed kickrolls that make the track both very melodic and aggressive. This track ends part 1 of the album. The artists mentioned that for them, this is about “getting your thoughts in line” and “being in the right flow” to produce good music. From what I can see, we can also interpret this track as an invite to focus on our goals and set course to greater heights. After all, the world is our to conquer, and we cannot be dragged down.

The second part of the album is called The Journey. This part is about doing something for yourself after going through the worst. It starts with I’m On My Way, a track heavily inspired by Trance. The first part sounds exactly like what you’d expect from a quality Trance release, which is extremely refreshing to hear in a Hardstyle album and reaffirms the talent these 2 producers have. We quickly go back to higher BPM’s. There isn’t much you can say about this track: it is simply an absolute masterpiece. All elements are combined extremely well, making this an absolute dancefloor hit, with an immense melody and heavy hitting kicks – this will certainly make an impact whenever it is played in festivals this summer. The energy here suits this part of the album really well – it reminds you of that period in your life where you know where you want to be, and you gather the energy to reach your destination.

We carry on with We Shall Meet Again.

I believe that joy will triumph over pain, just as I believe in the sun after the rain

The vocals at the start set a very uplifting mood right out of the gate. We then get a somewhat anti-climatic mid intro that gives an interesting change of pace. The climax continues what the previous track started, and keeps the energy levels high. I believe this track represents that time in your journey where you come across to whoever did you wrong in the past, but this time you have a clearer mind and you’ll disregard all the negative vibes you get from them.

We continue with The Hardness. We all choose a variety of different paths, but none has an easy way out. This is an energetic and aggressive track all over and it embodies the energy we have to maintain to overcome any obstacles. The distinctive element here is the massive melody that fills the speakers.

To finish the second part of the album we have You Know The Drill.

Never give up, never back down, it’s time to get ill, you know the drill!

As far as I can tell, the message here is simple: never give up. You have to push through your obstacles to reach your destination, and you’ve come far enough to understand what you need to get there. “Never allow your obstruction to become your excuses”. The melody here is very catchy and you can see the high attention to details here as well with the backing melody. The variation on the second climax gives an interest change of pace.

The third part of the album is the Take Over. We start with Breaking Down, a track that’s clearly oriented to simply destroy the dancefloor its played at, and the main focus here is the kick and bass, making this a very aggressive track, that’s still pleasing for the ears, even for listening at home. This track prepares us for what’s coming next…

We then have Taking Over, which we can safely say that it is the central point of this part of the album. Taking Over is about sitting at the throne of the castle you’ve built with the stones you had as obstacles during your journey. Just like I’m On My Way, there’s not much you can say here. It is, simply put, a very well produced track where the melody and the kick and bass go hand in hand. It is in tracks like these that the care taken into producing this album really shines through! In what concerns the artists, they’ve mentioned that this track represents how proud they are of what they’ve achieved together so far.

The album finishes with the appropriately titled Last Goodbye. During the paths we take, we have to get rid of people or things that we valued, but that aren’t positive to us. This is often very hard and in my point of view, this track is about that. In what concerns the track itself, it does feel like a goodbye and once again we have a very interesting change of pace here, as the track is clearly less energetic than previous ones and it really feels like a great way to close the album. This is another track where if you close your eyes you can grasp all the small details beyond the obvious vocals, kicks and melody and you can feel how all these elements were ingeniously combined to make another quality track.

To conclude, Prefix & Density showed with this album why they deserve a top spot amongst Hardstyle’s greatest. It is a very well made and very well thought out album that has an extremely familiar message to almost any of the listeners and that personally touched me at a deep level. This, combined with the top notch production and consideration put into every detail of every single track makes this album one of the best I’ve ever heard in many years of listening to Hardstyle. This duo is clearly at their finest as of now and it is going to be hard for them to keep up. But they are clearly committed to their sound and to the genre in general, so it is definitely expectable that they can keep up with this quality in future productions.

It is extremely interesting that listening to this album taking into consideration how it is broken down into 3 parts makes absolute sense for the message they’re trying to put out, and this immediately makes the album very interesting even for those that aren’t big fans of the duo’s sound.

Topping it all off, I believe this is exactly how modern Hardstyle should sound like – heavy hitting kicks with equally impressive melodies, combining roughness and melodic elements in perfect harmony.

I’d also like to thank Wouter and Bas for taking the time to actually sign the pre-order copies of this magnificent piece of art. I proudly own one of these signed copies, and it is most certainly a treasure that I’ll cherish amongst my Hardstyle collection. Scroll down to start your Second Pathway and be amazed… 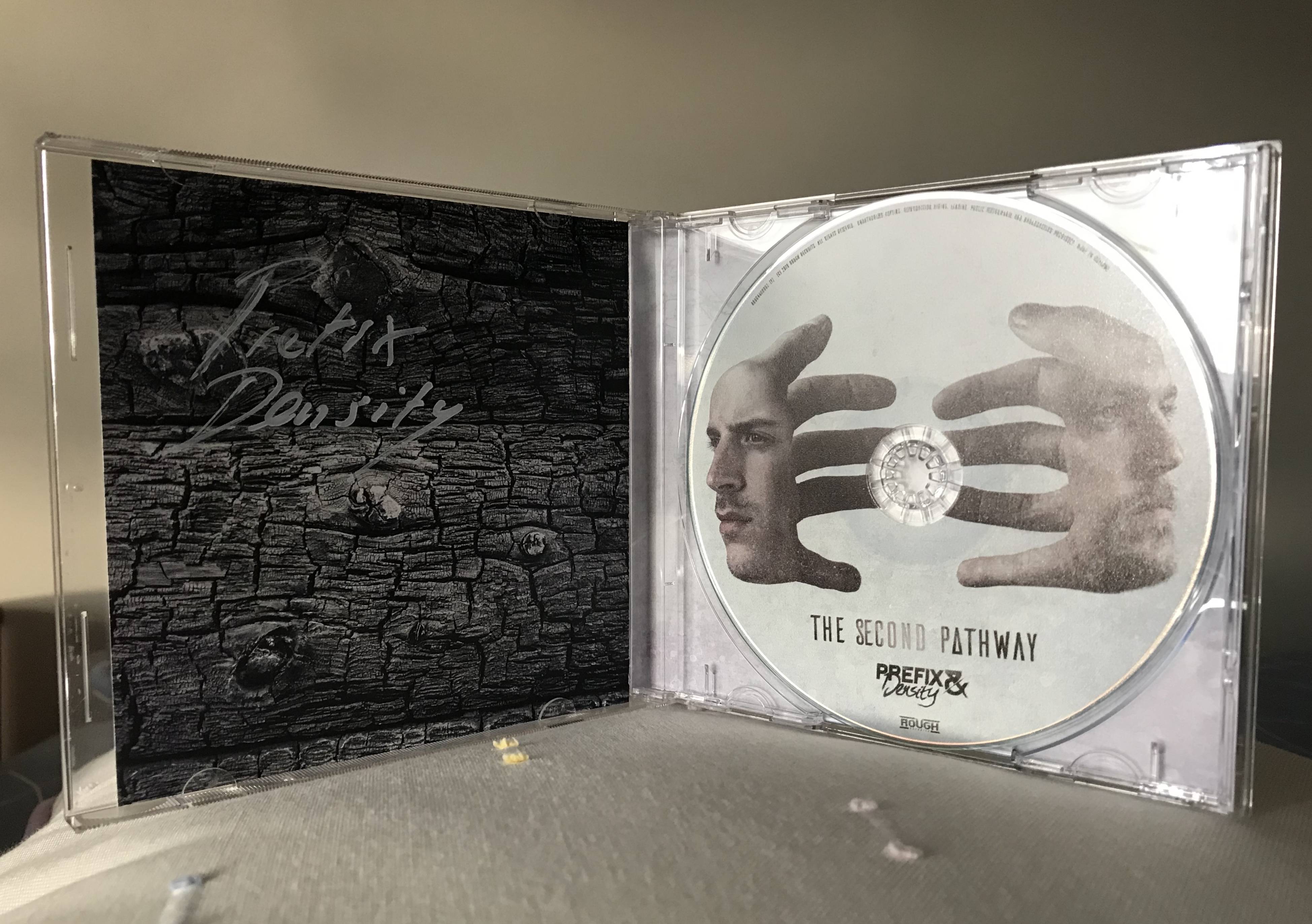